Get that "Old Morning" feeling 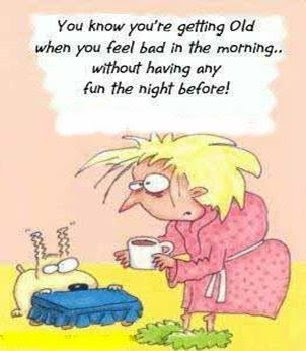 If just doesn't seem fair...Do you remember when you were in your 20's and drank all night...how did you feel in the morning? Great huh!

Now you can eat healthy, don't drink alcohol, exercise and wake up with the shakes and feeling lousy. Isn't old age great!

Posted by EMBRACE THE HILL at 9:17 AM No comments: 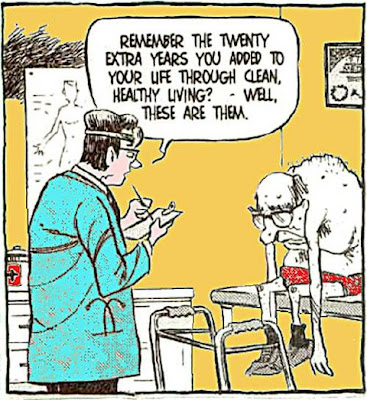 What does and extra 20 years added to your life through healthy living do for you?

Posted by EMBRACE THE HILL at 9:02 AM No comments:

A very tired nurse walks into a bank,

Totally exhausted after an 18-hour shift.

Preparing to write a check,

She pulls a rectal thermometer out of her purse

And tries to write with it.

When she realizes her mistake,

She looks at the flabbergasted teller

And without missing a beat, she says:

Something to make you smile, laugh or just say,"Good grief!" 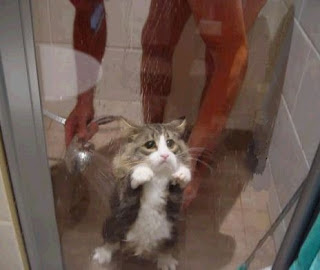 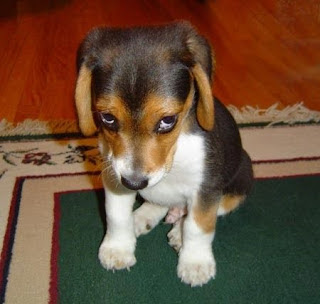 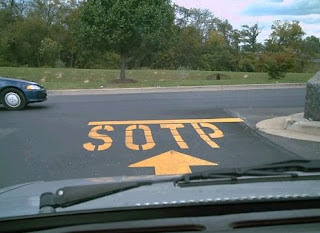 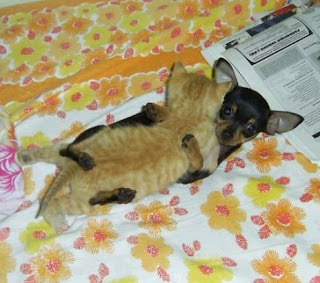 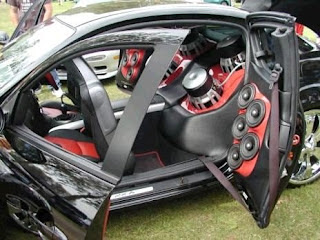 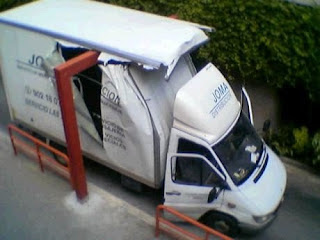 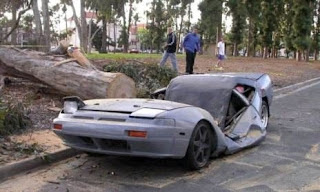 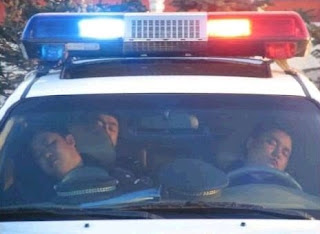 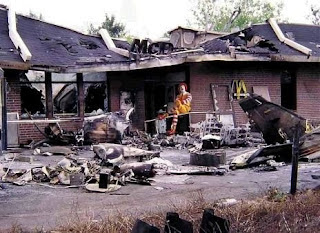 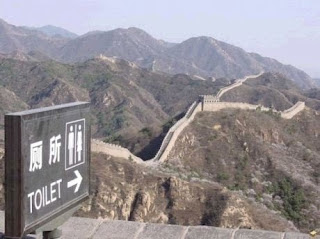 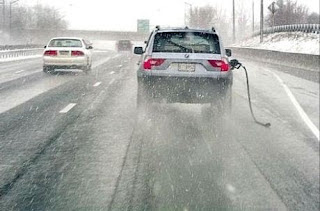 This is what 'I thought your husband was out of town' looks like... Hope this made you smile!
Posted by EMBRACE THE HILL at 9:51 PM No comments:

What Car Are You

You're sporty, yet practical, and you have a style of your own. You like to have fun, and you like to bring friends along for the ride, but when it comes time for everyday chores, you're willing to do your part.

Take the Which Sports Car Are You? quiz.

Have you ever given thought as to what kind of car you might be if you were a car? Me neither, but a friend sent this link to me with the model of car she is. I decided to check it out and took this quick twelve question test. After you find what type car you are, put it in the subject box and forward to your friends.
Let me know too what car you are!!!!!

During a visit to the mental asylum, I asked the Director how do
you determine whether or not a patient should be institutionalized.

'Well,' said the Director, 'we fill up a bathtub, then we offer a
teaspoon, a teacup and a bucket to the patient and ask him or her to empty the bathtub.'

'Oh, I understand,' I said. 'A normal person would use the bucket because it's bigger than the spoon or the teacup.'

'No.' said the Director, 'A normal person would pull the plug. Do you want a bed near the window?'

ARE YOU GOING TO PASS THIS ON, OR DO YOU WANT THE BED NEXT TO MINE ?
Posted by EMBRACE THE HILL at 9:18 AM No comments:

The American Freedom Campaign has set a goal for itself. We want to expand our
base of online supporters from 38,000 to 50,000 people over the course of the
next month. With this 30+ percent increase, we will enhance our ability to
influence Congress when important bills are under consideration. We will also
be able to activate a larger number of Americans during the upcoming general
election season when the issue of excessive presidential power should be at the
top of the national agenda.

Why should your friends join the American Freedom Campaign -- either by signing
our petition or by signing up for AFC updates on our home page? That's a good
question. This is why (and this, of course, is what they will read when you
forward this E-mail along):

? The American Freedom Campaign was launched less than eight months ago to build
a grassroots movement to help restore the Constitution and reverse the
violations of civil liberties and human rights that have occurred over the past
seven years.

? Over the past few months, the American Freedom Campaign has filled an
important role in Washington by leading the fight to restore our system of
checks and balances. While there are many organizations fighting specific
policies considered unconstitutional, few, if any, are focused almost
exclusively on restraining executive overreach.

? Consistent with its mission to restore checks and balances, AFC aggressively
-- and successfully -- pushed the U.S. House to pass a contempt resolution
against Bush administration officials who refused to comply with congressional
subpoenas. The Capitol Hill newspaper, Roll Call, in an article about the
contempt vote in the House, cited AFC as an example -- in fact, the only example
-- of an advocacy group generating grassroots pressure on House members.

? AFC has also helped inject constitutional balance of powers issues into the
debate over the nation's Iraq policy. As the Bush administration negotiates an
agreement with the Iraqi government to establish the parameters of the two
nations' bilateral relationship beyond 2008, AFC is working with members of
Congress to ensure that no significant commitment is made without the approval
of Congress. Toward this end, AFC hosted a conference call on which Rep.
Barbara Lee (D-CA), joined by two constitutional scholars from Yale Law School,
introduced a resolution expressing the sense of the House that any major
agreement reached without congressional approval will be invalid.

? As the 2008 campaign moves forward, AFC will play a critically important
educational role. We will aggressively push the message that the Bush
administration's dramatic expansion of executive power makes the selection of
the next president one of the most important decisions the citizens of this
nation will ever make.

But if we are going to succeed moving forward, it will only be with your help.
So, please, take a minute and forward this email to anyone you think would be
interested in our mission. We hope they will then either sign our petition or
sign up for AFC updates on our home page:

If you are not able to forward this email along, we hope that you will consider
making a financial contribution to the American Freedom Campaign. If every
person on this list gives just $10, we will be able to dramatically expand our
public education efforts. To visit our donation page, just click on this link:

As always, thank you for your support.

Get paid every time someone is on your website.

It is easy to sign up. The best thing about this is it is free for you to join.

Why did the chicken cross the road?

Why did the chicken cross the road?

DR. PHIL:
The problem we have here is that this chicken won't realize that he must first deal with the problem on 'THIS' side of the road before it goes after the problem on the 'OTHER SIDE' of the road. What we need to do is help him realize how stupid he's acting by not taking on his 'CURRENT' problems before adding 'NEW' problems.

OPRAH :
Well, I understand that the chicken is having problems, which is why he wants to cross this road so bad. So instead of having the chicken learn from his mistakes and take falls, which is a part of life, I'm going to give this chicken a car so that he can just drive across the road and not live his life like the rest of the chickens.

GEORGE W. BUSH :
We don't really care why the chicken crossed the road. We just want to know if the chicken is on our side of the road, or not. The chicken is either against us, or for us. There is no middle ground here.

COLIN POWELL :
Now to the left of the screen, you can clearly see the satellite image of the chicken crossing the road...

ANDERSON COOPER - CNN:
We have reason to believe there is a chicken, but we have not yet been allowed to have access to the other side of the road.

JOHN KERRY:
Although I voted to let the chicken cross the road, I am now against it! It was the wrong road to cross, and I was misled about the chicken's intentions. I am not for it now, and will remain against it.

NANCY GRACE :
That chicken crossed the road because he's GUILTY! You can see it in his eyes and the way he walks.

PAT BUCHANAN:
To steal the job of a decent, hardworking American.

MARTHA STEWART :
No one called me to warn me which way that chicken was going. I had a standing order at the Farmer's Market to sell my eggs when the price dropped to a certain level. No little bird gave me any insider information.

ERNEST HEMINGWAY:
To die in the rain. Alone.

JERRY FALWELL :
Because the chicken was gay! Can't you people see the plain truth?' That's why they call it the 'other side.' Yes, my friends, that chicken is gay. And if you eat that chicken, you will become gay too. I say we boycott all chickens until we sort out this abomination that the liberal media white washes with seemingly harmless phrases like 'the other side. That chicken should not be crossing the road. It's as plain and as simple as that.

BARBARA WALTERS:
Isn't that interesting? In a few moments, we will be listening to the chicken tell, for the first time, the heart warming story of how it experienced a serious case of molting, and went on to accomplish its life long dream of crossing the road.

ARISTOTLE:
It is the nature of chickens to cross the road.

JOHN LENNON :
Imagine all the chickens in the world crossing roads together, in peace.

BILL GATES:
I have just released eChicken2007, which will not only cross roads, but will lay eggs, file your important documents, and balance your check book. Internet Explorer is an integral part of eChicken. This new platform is much more stable and will never cra...#@&&^(C% ....... reboot.

ALBERT EINSTEIN :
Did the chicken really cross the road, or did the road move beneath the chicken?

BILL CLINTON:
I did not cross the road with THAT chicken. What is your definition of chicken?

AL GORE :
I invented the chicken!

COLONEL SANDERS :
Did I miss one?

AL SHARPTON:
Why are all the chickens white? We need some black chickens.
Posted by EMBRACE THE HILL at 6:07 PM No comments:

Stay Healthy and the Brain

Buy Me a Cup of Soup

Buy Sandy a Cup of Soup :-) if you liked this post.

Be credited with a generous commission of Qassia dollars, which will help your website rank better and give you more clout at Qassia.